The best part about Lulu’s tumultuous and yet mercifully brief period of condo-shopping was that her real estate agent, Bruno, writes in what I, as a Minnesota Lady of a Certain Age, would call “Prince-Speak, but is probably more correctly referred to as “he doesn’t know the difference between texting and writing in a professional setting.”

Yes, his E-mails to her are all:

Remember 2 B careful 2 sign in all 3 places on the form I faxed U.

Lulu is shocked. Our boss recently enrolled her in a series of “Communicating With Impact” professional development courses, and so as a result, she is extra shocked. Now, our boss might have been better served enrolling Lulu in a class called “Communicating with Less Impact,” but I digress.

I don’t do a lot of links but I really must direct you to the excellent blog of Maud Newton,  who a few weeks ago in turn directed us to a piece by Lee Siegel, who says that E-mail is converting casual conversation into something that passes for writing.

You chat with your fingers, rather than try to organize thoughts into words,” he says, the result being that “soon we won’t expect writing to have irony or different levels of meaning any more than we expect casual conversation to have a meticulously crafted structure. The discipline of arduously thinking your way into words has given way to the indulgence of going on, and on, and on, as a substitute for thinking.

Praise B, chicklets, praise B. 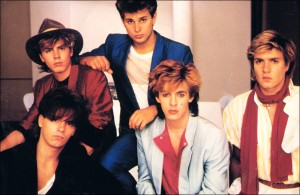 Lily spent last Tuesday night on Liberty Island at a private party to launch some new brand of vodka. Not being told by the publicist friend who invited her that the event was part of Fashion Week, she came dressed in her usual Lacoste-meets-Goth clubwear. They were ferried over and plied with pink vodka drinks distributed by supermodels in babushkas. Enough pink drinks and she was able to forget that she was wearing a polo shirt and platform boots and Mikal Baryshnikov was wearing Armani.

After watching fireworks while lounging on Persian carpets and plush throw pillows scattered about on the lawn, the evening ended with a concert by none other than Duran Duran. Playing on a floaty raft thing forty feet out in the water, they were, Lily reports, “phoning it in.” She did not care, though, because of course she will someday marry Simon Le Bon. One doesn’t want one’s husband to be too enthusiastic when whoring himself out at corporate gigs, does one?

He took off his jacket and she was overcome with a desire to yell “take it all off” but thought about how she was surrounded by nine-foot supermodels doing shots of vodka and just clapped politely.

“Then we got back on the ferry with Mikal and the supermodels and I went back home,” says Mrs. Le Bon.

“Is this the highest level of man I can hope 2 attract? A kid 6 inches shorter, 10 years younger, armed with a lunchbox purse and a mouth that would dirty a bar of Ivory?”

We should all be so lucky.