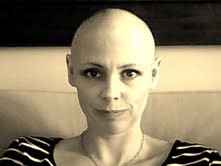 This post is about cancer, Chicklets. This post is no fun. We’re all about the “mock” here at Mock Chicken, but you can only mock cancer so much before you start to sound like an idiot. You have to recognize its power over you, if only metaphorically. They start to come at you with Stage X, blah, blah, invasive, blah, blah, and the smart thing to do is to listen to the doctors, to listen to the People Who Know. It’s important to do that.

But it’s also important to listen to your heart.

When the Boss was first diagnosed, she talked about starting her own blog. We talked about various titles and subtitles. DARK PINK was one of them, because though she was down with the whole “I’m fighting cancer” thing, she wasn’t so sure it was all going to be all daffodils and pink ribbons. I like to think, invoking Lily, that she was finding her goth self. Then we thought of BITE ME, CANCER.

Wait. You can’t say that. It turns out that having cancer isn’t a black and white thing. There is no line in the sand where on one side you’re sick and on the other—congratulations!—you’re cancer-free. It turns out that anywhere you have to fill out a form—at a spa, for instance—there is just a single box marked CANCER.

The Boss is, rightly so, like, “What does that mean? Like, ‘had cancer, ever?’ ‘Currently undergoing treatment for cancer?’ ‘Afraid of cancer?’”

She has a point. The word “CANCER” with a check box? “Yes! Every time I close my eyes, I think of you!” Or, perhaps, “No thanks, I think I’ll pass!

But what if you can’t? What if it’s already there, lurking despite your half marathons and your organic vegetables?

Then, I’m sorry to say, you’re fucked. Yes, there might be a silver lining, and I’ll get to that—we’ll end with that, for sure, but you people with the daffodils, you can pretty much go shove them up your ass. 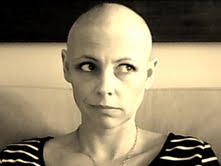 Yes. This is true for all of us, is it not? But if you’re looking at yourself in the mirror and you have no hair and you haven’t been at work for five months, it’s a little more true.

“I’m not good at being with myself,” says the Boss. The honesty of this simple sentence hits me in the gut. I think I went to a year of yoga teacher training that cost several thousand dollars to come to this same realization. And I’m not trying to be glib here, I’m just breathless at the raw truth of the statement.

Lulu, the Boss, and I have spent a lot of time talking about what no one should never have to talk about: how to be honest with one’s children but not scare them. This is what it all boils down to, is it not? It might be as visceral as, “I have cancer,” but it might also be as seemingly simple as, “I’m not going to let the monsters come into your bedroom while you’re sleeping.” The difference is that she says the former and I say the latter—my son’s fears have to do with monsters raising his blinds—but what if the two are the same thing? How do you promise your children that cancer is not going to get you? You can’t. You have your statistics, and the statistics might be very much in your favour, but, ultimately,  you can’t. And that’s scary. You frame it to be all about the kids, but it’s all so motherfucking scary. You’re supposed to say, “I don’t want to scare my kids,” and we get that, but maybe what we’re also saying is, “I don’t want to be this scared.”

When you’re young and you have cancer, no one wants to accept it. They’re all, “My friend who had breast cancer when she was 39 had a mastectomy and…blah, blah…” All I can really think to say is that cancer doesn’t give a shit how old you are. It is indifferent to your story, to your suffering. It is the great equalizer: it doesn’t  care if you are 36 or 76. You can buy a hundred self-help books and none of it makes a difference. None of it is any truer than what you already know in your heart: this might get you. Maybe now, maybe later. Maybe NEVER, but you never know. And because you never know, it’s in charge, forever.

So you have your mastectomy. You have your chemo. You take your drugs. You are a “survivor.” But I think (and this is just me talking, I’m not putting words in the Boss’s mouth—I’m just projecting) that the awful/amazing thing about cancer, is that it makes you face your worst fear. And your worst fear, it turns out, isn’t a single thing. It’s everything mixed together. It’s: “how do I be by myself?” mixed with “what do I tell my kids?” mixed with “Do I check yes or no when they give me the ‘cancer’ box at the spa?” And that’s the thing about cancer: it’s not linear. It’s everything all at once. It’s too much.

I wish I had a clever ending. Sometimes I like to circle back to how I started, which is this case is:

But I don’t think that’s actually true. I think the Boss is exactly who she’s always been. She’s facing cancer with the same relentless introspection she brings to everything. It’s just that this is harder. Much, much harder. If there’s a discrepancy there, it’s a version of the same discrepancy we all have, whether we acknowledge it or not. The difference is that she’s narrowing hers, much faster than the rest of us. She’s burning off the bullshit. The flames are cleansing, but they also hurt like hell. 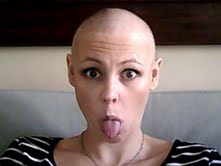