To recap: The Boss announced her intention to run a half marathon that was to take place four months after her chemotherapy ended. She’d been training for one when a breast cancer diagnosis crash landed in the middle of her life last fall.  (You can read more backstory here and here. Or you can read about the Boss in her own words here.)

So Lulu and I thought we could probably get off our healthy bums and train for the 5K that’s associated with the race. You know, like a tribute to the lady who brought us together (she really was our boss) and became our beloved friend. So we embarked upon the Couch to 5K training program, which involves a lot of walking and running. And walking and running and walking and running. Then there’s more running than walking. Eventually there’s no walking at all.

I’m not gonna lie, running is not my favourite way to pass the time. I’m not a natural runner, I guess. It’s fine. It’s nice when it’s over. Toward the end of a run, I sometimes chant in time with my steps: “This is not as hard as chemotherapy.” One syllable per step. Yes, I sound like an idiot.

Mind you, if I HAD to, I could probably have run a 5K when I started. But it wouldn’t have been pretty. My goal was to run it comfortably, to feel like I’d truly invested the time to get ready for it. And, you guys, I totally have.

I’ll be raising money for the North York General Hospital Foundation. North York is where the Boss had her chemotherapy, and they were very good to her.

So, if you wanted to throw a few bucks my way, I’d be very, very grateful. You can do that here:

So it turns out that running is not so hard when: 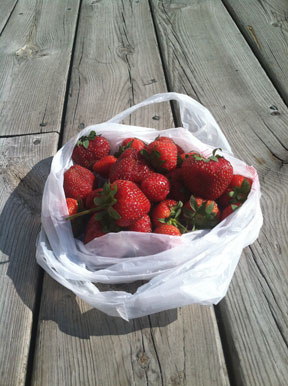 So I just moved up to five-minute running intervals and called Lulu to complain about it. I got this voicemail in return.

Hi! It’s me! Oh my God, I’m so out of the loop with everything. I’m trying to get organized with my life. Yeah, I just went from the minute-and-a-half intervals to the three minute intervals. [She pauses for maniacal laughter.] I thought there was something wrong with my phone because I wasn’t prepared for it. I’m always like, ‘press a button, put my headphones on, and go.’ So I was very confused and thought I was dying.

I’m super nervous about the five minutes. But good for you, man, you’re like my superhero.

OK, call me when you can. I don’t really have any other news. I’m just sitting still here for a second and enjoying a beverage. OK, bye.

You guys, running is hard.

Remember how Lulu and I are training for a 5K? (And how the Boss—the cancer patient—is training for a half marathon? Hey, some of us were born great. Some of us have to work really hard for mediocrity.)

So we’re using this Couch to 5K app, which is basically a run-walk interval program. You run, you walk, you run, you walk. As you progress, the running intervals get longer, and the walking intervals get shorter. A nice lady turns down your music and says, “Now run! You’re doing great!” She’s very soothing and even-toned, this lady. It’s kind of disconcerting: she turns down my Gaga and announces, “Brisk walk!”

Really, it should be the reverse. Lady Gaga needs to record one of these apps. Imagine: At the appropriate time, Gaga rips though your brain shrieking, “You’re a freak bitch, baby! RUN!!!!!”

There are a zillion versions of this app, and I ask you in all seriousness, why not a Lady Gaga one? Somebody should run with this. No pun intended. (This is just like the time I invented that banana Tupperware thing in my head and then ten years later someone actually made it.) Come on, Gaga, come on, venture capitalists of the world: Mediocre girls everywhere need you.